“This transformative guide completely breaks down our current understanding of biological sex and gender diversity.

Introducing readers to seven variations of human sex, commonly considered intersex, the book challenges the myth that sex and gender are binary and explores the inherent diversity of biological sex and its relationship to gender identity and expression, and the impact this has on society. Examining historical, linguistic and socio-cultural understandings of sex and gender, as well as genetic and scientific definitions, the book is an important resource for dismantling gender and sexuality-based discrimination and promoting understanding and inclusivity.

Co-written by one of the world’s leading intersex activists and a highly respected scholar in biological sciences, and accompanied with detailed anatomical illustrations throughout, this pioneering text is the essential introduction to gender and sex diversity for gender studies, women’s studies, biology and genetics courses, as well as professionals working with intersex and trans communities.” 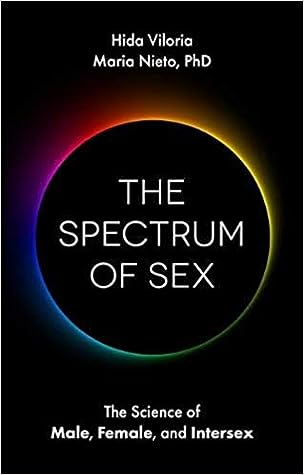 I was super excited to read this book. It is exactly the sort of book that I love to see published. I already teach about how sex isn’t binary in my sex ed class. I don’t go into the in-depth aspects of it, because I doubt I could do that aspect justice and keep the kids interested. If I had the audience that wanted science, I would totally go into it (I ask every time).

That being said, I was excited to learn more. I didn’t learn anything more from reading this book. This is the same stuff I got in an hour lecture from a psych professor in college as part of a psych club event. Most of that lecture was making sure every single person in the room understood why lying to people was wrong and forcing someone to have surgery (or surgery without consent) is wrong. So this book was disappointing for me. I wanted it to be more. Maybe it was the length or maybe it was there is just not a lot of research out there since it has been hidden for so long by the people in power? I don’t know.

I loved the personal stories at the end of the chapters. Those were the parts I looked forward to and found the most engaging. Hearing directly from people can have that emotional impact that the science side can lack. It made the book feel more complete with both science and emotions behind the points made.

The book itself was almost unreadable. There were so many typos and layout errors that I felt like I had to decipher the text to read it. I am hoping that it is just the ARCs that are like that, because otherwise there should be a new editor and the authors should each get new keyboards. “Often” was spelled as “oen” every time it was used. “Different” was “dierent”. I can go on and on about examples of this. There were times when I couldn’t tell what the word was supposed to be anymore from the issues.

In the last chapter or the second to last chapter, the authors lost me entirely. They said that trans people “misrepresent” their sex, by saying they are male if they are a trans man for example. They continued on to say  that I would have to pretty much out myself constantly to accurately represent myself to the world, which is both dangerous and unrealistic. They say that calling someone cis erases intersex people, which I can understand. It doesn’t allow for a third option outside of trans and not trans. That was great to think about, but there was also no suggestions for moving forward. Instead it was just shame on trans people for creating another binary. I felt attacked at one point in particular. The authors said that trans people don’t transition their sex, so the narrative of female to male is incorrect. My trans identity is heavily rooted in my body. My issue is my body is not male. My gender has not changed through the process of my transition, it is why I identify as transsexual instead of transgender. So that statement erased my existence. I know it was not the intent to personally attack me, but I still felt attacked. The authors also kept saying that identity is in flux through adolescence, that adults were the ones who could transition. Gender identity is pretty set before a kid is even in elementary school. I started my medical transition at 15. Multiple studies have been done that show trans kids don’t just grow out of being trans and that delaying transitions is not healthy. So pretty much every time trans people were mentioned in this book there was misinformation. So the last sentence that says this is a great guide for the intersex and trans community feels like a lie.

I will be very clear on one point: forcing surgery on intersex children is wrong. Body autonomy must be maintained. Consent is necessary. My views on this were reinforced with this book and the more I read from the intersex community. Also, fuck John Money and his bullshit. None of this is new to me, but it is incredibly important to state since not everyone seems to understand why forcing children into surgeries they don’t need isn’t necessary.