“After a final act of horrendous abuse threatens her life, fifteen-year old Sam runs away from home and into the Olympic Mountains of Washington State. Physically and emotionally exhausted, she happens upon a mysterious tree house in the woods which shelters an old women named Theory. Through elements of magic and sage advice, Theory takes Sam on an unforgettable healing journey. Sam begins to discover that she, too, has powers. But her process is interrupted by the nervous reality that her abusers will soon go after her younger sister, Nova, unless she can get to her first.

With the help of Sam’s friend, Dodger, and two other spirited kids from foster case, the group sets up a hidden camp in the wilderness and forms “The Orphan’s Collective.” While Struggling to create their own concept of “family”, Dodger and Sam also work to navigate their budding feelings for one another. AS the group formulates a plan to reach the masses of kids left behind by adults who never wanted them, they naturally begin to rewrite the fate that seemingly already been decided for them.

Sam’s Theory is a story of immeasurable grit and re-empowerment after trauma. Embedded with real-world advice, it is the recognition of our tremendous capacity as human beings to withstand darkness and summon resiliency, simply by learning how to use our voices and reconnect with those around us.” 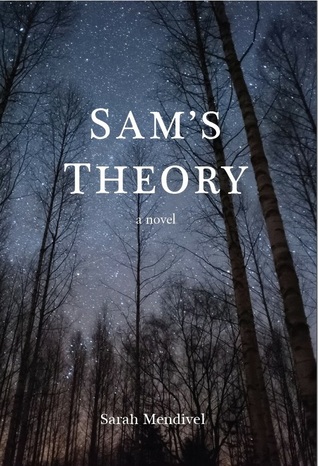 I got an ARC in return for an honest review from the author. I have a soft spot for indie authors and first books. The books always feel more special to me. I am very thankful when I get an ARC of a first book.

The book is geared towards a YA audience, but the book is LONG. I am talking long long. It took me a few days of reading to get through it, when most YA take me a day. Don’t let that deter you, instead that allows the characters to grow, backstories to be lived out, and plots to fully wrap up. There was a reason the book needed this many pages, trust me. My only concern is that the people that really need to get this book will be deterred by the length. So please, listen to me, it is worth it. Read through this book, even if it is only a few pages a day.

The book follows the healing and growth of Sam. Sam is running away from a residential placement and her abusive father known throughout the book as “Him” and “He”. No name is given which makes him feel more powerful and scarier, which I feel like is a conscious choice of Mendivel. We are able to place ourselves in Sam’s shoes for a while and fear Him too. The descriptions of the abuse that Sam faced at the hands of Him are not overly graphic, some are ambiguous as to the severity. There was clearly physical violence, but there were a few scenes that may have been sexual violence as well. Mendivel builds up to those scenes and has Theory guide Sam (and the reader) through them making them less scary and intense. The interruptions and narration provided by Theory allowed me to read them without fear of being triggered. Sam and Theory then work on coming out of the memory together. There is a very in-depth process of healing. Most of the book is the magical process of healing (I do mean magical as Theory has magical abilities, but they are very unique). This section of the book is by far my favorite.

The next section of the book is Sam’s adventures starting and running the “orphan’s collective”. Sam and Dodger do manage to meet up at the lake. Dodger brings some other kids too. They figure out their own society and Sam starts to realize she has the power to help other heal the same way Theory does. This section was interesting. Sam still runs to Theory for help and has a whole WWTD (what would Theory do) mentality. She is still growing. The character development in this novel is just phenomenal, by far one of the best I have seen in years. The other kids have fully fleshed out characters that Sam has to figure out and learn how to work with in relation to her own issues. That is a huge issue I have seen in the queer groups I run in. A lot of the people have issues stemming from being abused, but they expect that their own issues take precedence over anyone else and that bad behavior can be explain away by abuse. Sam learns that that is not the case. Instead Sam learns how to think out where the bad behavior comes from and learns how to interact with people who are different parts of their healing journey. She tries to help them grow. The big thing here is that the others want to grow so they are willing to do the work. This section does have a mildly graphic rape scene of one of the characters. The character retells what happened briefly, but there is no doubt what had happened unlike in earlier mentions of abuse.

The last section is Sam and Nova being reunited. This is the least developed plot in the story. It is not revealed where Nova was, it is not revealed how Nova was convinced to go with a complete stranger, it was not discussed what happened to Nova. This may be because Sam doesn’t care what happened now that she has Nova, which would explain why she doesn’t dig for answers. That would be pretty fitting for Sam’s character. It wouldn’t be fitting for the world that Mendivel has created for a plot to have that many loose ends, so that is the only explanation I have. Nova is the only character that doesn’t feel fleshed out fully. She seems flat and simplistic. That may just be because that is how Sam sees her as Sam has not seen her in a long time. Sam instantly falls back into the role she played a child. She is the protector. This is also the section where I hit the first thing about the book I didn’t like. Sam and Nova refer to each other as “seester”. I don’t know why, but it annoyed me to no end whenever they said that to each other. I just overall didn’t like Nova either. I think that has to do with her not being as real as the other characters, she felt like an interloper in the family that had been created, which just tells you how much I have grown to love and feel protective of the Orphan’s Collective.

Overall, the book is a long story about healing, finding a family, and becoming who you are meant to be. It is a story of overcoming the abuse. It is about not letting yourself become stagnant as a victim, instead growing and thriving in life by working through the abuse. It is about learning your value and learning that you are loved. This book is very powerful. I am very glad that this book exists. More books that are geared towards kids and people that have been hurt are needed. It is a sad reality that many people are abused and hurt. It is also a sad reality that these people don’t get the help that they need to move forward, instead the cycle often continues. This book is just one effort to stop this and to help people handle something horrible that has happened to them.

4 out of 5 stars. I would recommend this book, with trigger warnings.

The book is not for sale just yet, but you can track the progress or potentially get your own free copy here. The book is to be published on January 31st, 2018.